The THING: It is Drawn 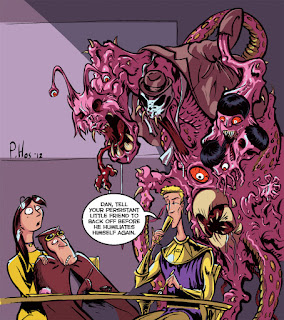 This week the prompt is...

Paul Hostetler did the art for this one. Here is his website (and yes, Mike, we know you specified a different monster, but this monster looks pretty sweet, huh?).

Mike, sorry to disappoint your disappointment, but I did in fact draw John Carpenter's the Thing as you requested.  It makes sense.  The Thing was in Antarctica.  Ozy lives in Antarctica.  The Thing absorbs organisms.  Ozy has a habit of leaving organism bits lying around.  You can see there it's absorbed the bodies of Rorschach (blown up in the snow) Bubastis (Disintegrated in a lab) the three Chinese man servants (poisoned in a bubble garden) and the "Squid" (teleported to New York and exploded).  All of them were in Antarctica at some point.  the Thing could have gotten all of their DNA, and yes, Ozy is serving his guests Hostess cakes for dinner.

Email ThisBlogThis!Share to TwitterShare to FacebookShare to Pinterest
Labels: fan art, John Carpenter, ozymandias, the line it is drawn, The Thing, watchmen

Love it. All those reasons were precisely why I suggested Ozy & the Thing. It looks great.

ah. At first I did not grasp that it was a reference to "The Thing."

I had thought it was perhaps Rorshach going Alucard mode. He had that scary reputation for a reason, right? Despite being a short little nebbish of a guy on the wrong side of forty, who without the mask looked more like Alfred E. Newman than Frank Castle. What, US worry?