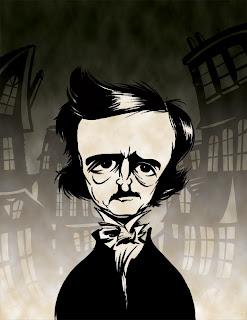 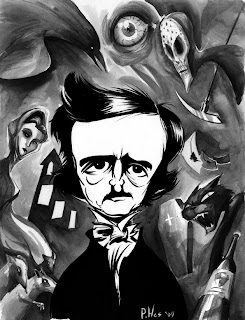 This is seasonal. And Poe is very easy to draw.

UPDATE: As a matter of process, whenever I paint something, I scan the ink work first, just in case I flub up. I can always go back and finish the piece digitally. And while I did enjoy painting Mr. Poe here and all his paraphernalia, I thought a sleek digital background would be more stylish in some ways. Let me know your opinion.
Posted by P. Hos at 8:13 PM 1 comment:

Sit On My Face 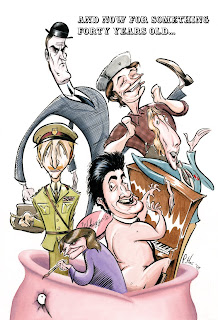 Monty Python's Flying Circus is 40 years old this week, and you cna't pass up an opportunity like that to torment your loved ones with endless Python-athons and sing-alongs, can you?

That, and I would just like to be the first person here to say fuck at a 40th Anniversary.
Posted by P. Hos at 4:23 PM 1 comment:

And the Nobel Goes To... 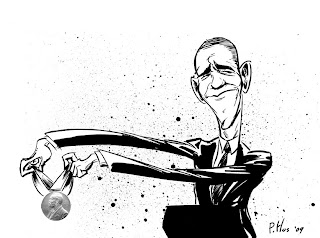 So: Barack Obama gets the Nobel Peace Prize, 9 months into office, having been nominated 12 days after being inaugurated.

And he's getting slaughtered for it. Everyone, including himself, seems to agree that he doesn't deserve this thing. The Republicans are using this as a catapult to hurl accusations of European elitism, and failing to help the domestic economy, and of possibly going soft on Afghanistan, and of being Kenyan, and a Communist, etc.
So, does he deserve it? The Peace Prize is generally given to activists for their outstanding work toward achieving a a more peaceful world, and 225 of those people were also nominated for the award. But the prize is also given to those who have the potential to achieve a more peaceful world. Not many people have gotten the award on the latter point, mostly, I'm supposing, because brou-hahas like this can be expected to erupt when they do.

Maybe Barack Obama doesn't deserve it now. Maybe he'll deserve it two or three years down the line. Hopefully he will.
Posted by P. Hos at 9:47 AM 1 comment: 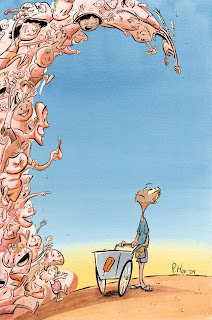 One final little art thing from summer I never got around to scanning until now.
Posted by P. Hos at 5:05 PM No comments: 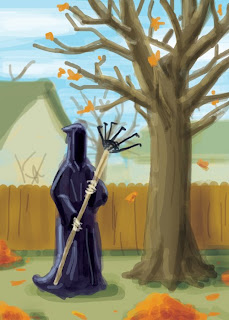