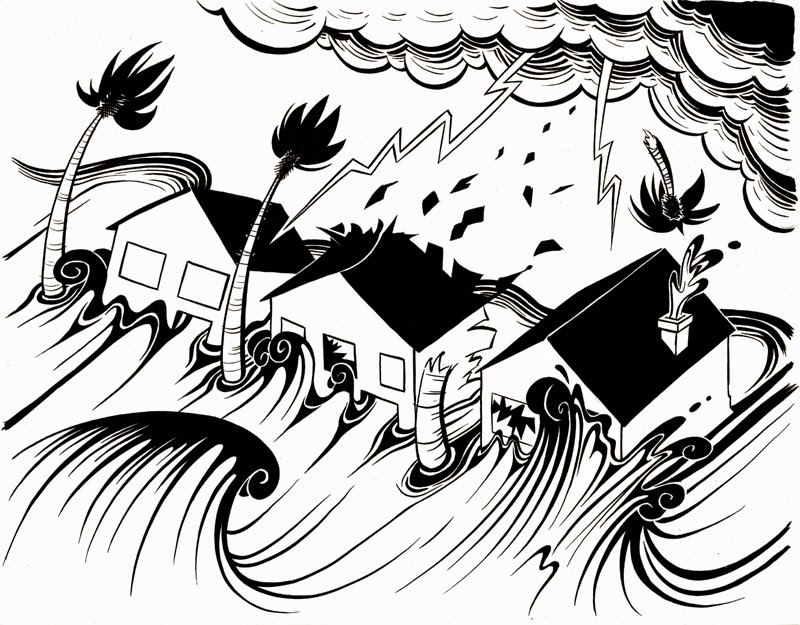 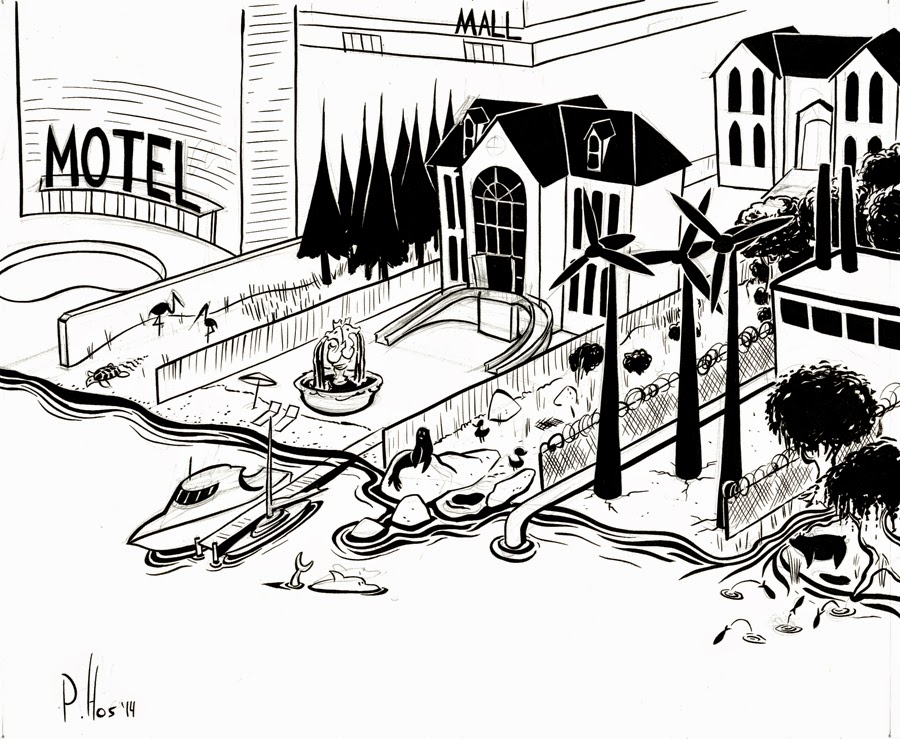 Those animals seem kind of cramped, don't they? 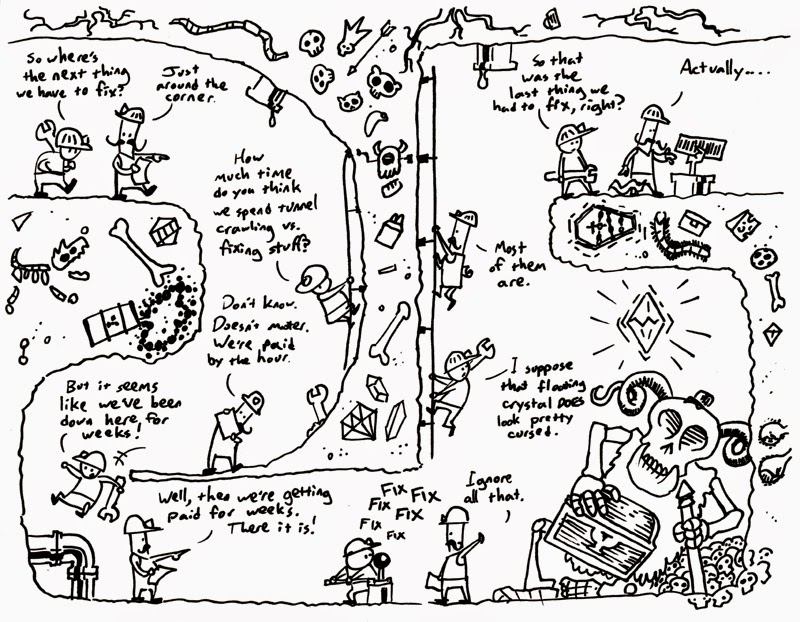 A Sharpie comic I made this afternoon. 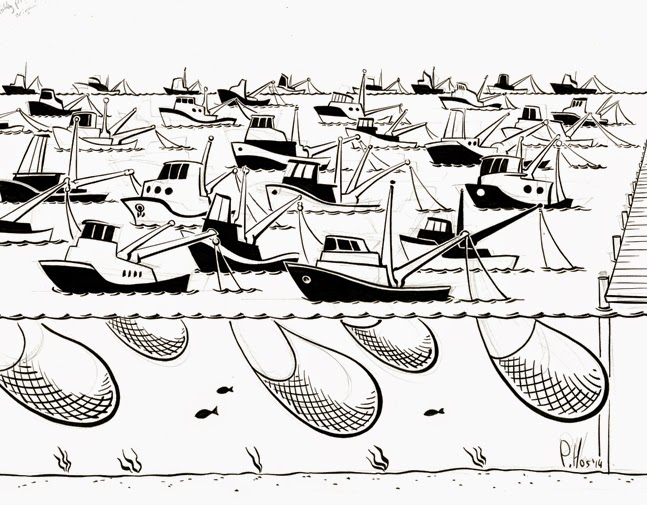 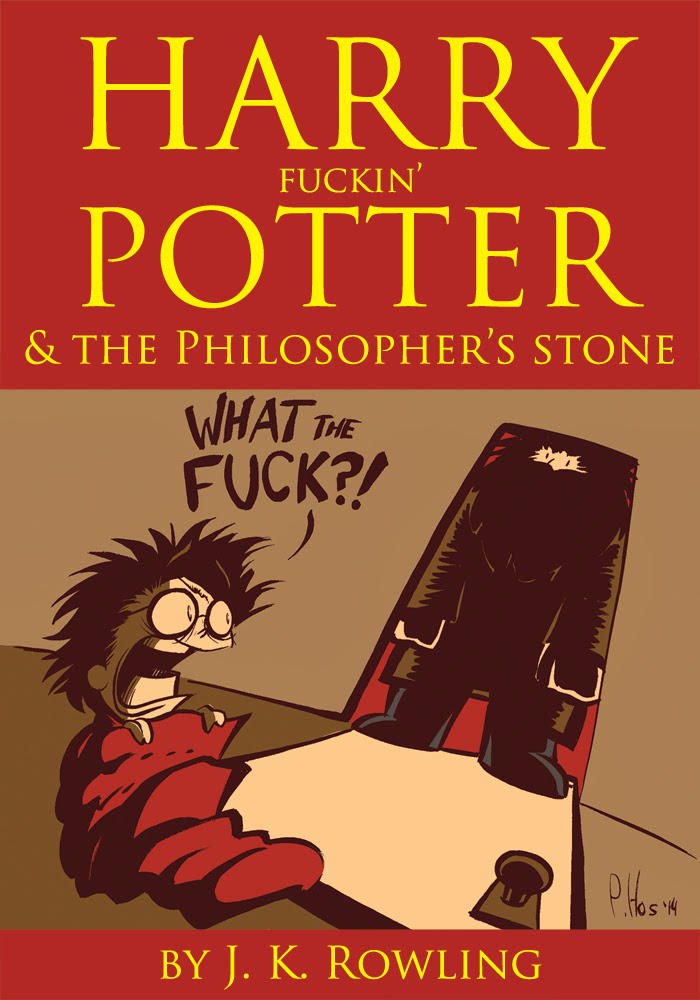 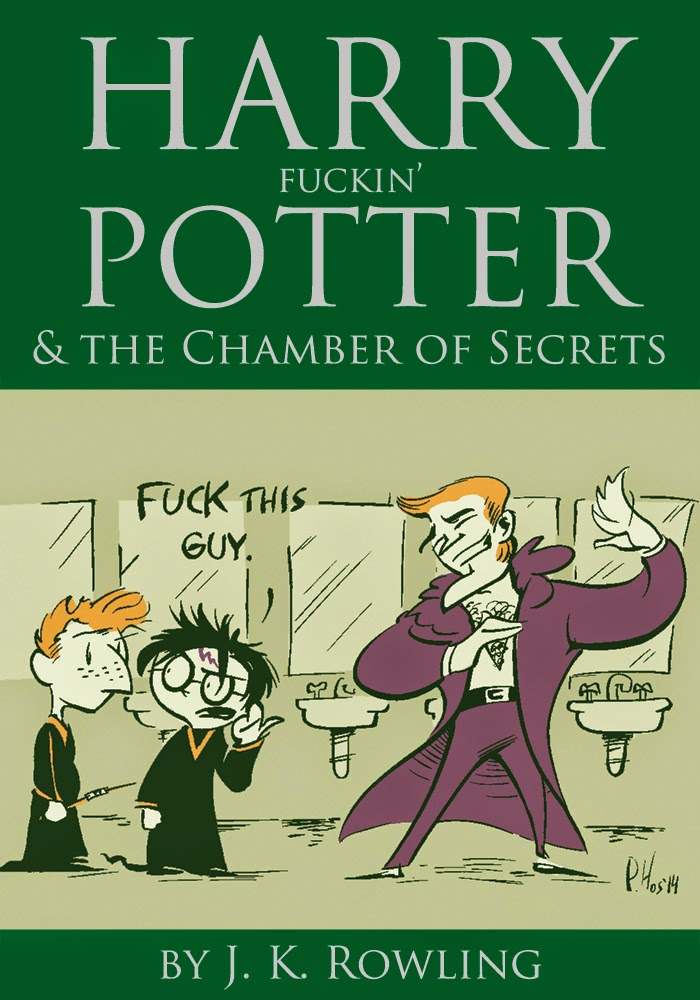 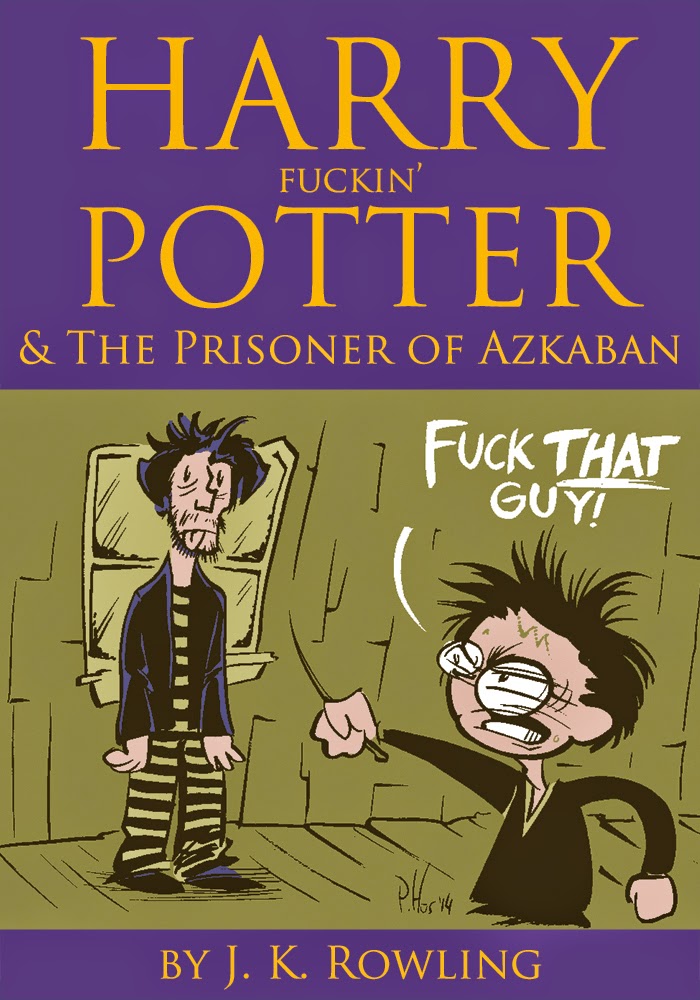 Goddamn it Harry, half the crazy stuff that happens in these books happens because you refuse to follow simple instructions or tell an adult, and every decision you make is wrong.

The real title of the series should be "Hermione Saves Her Dumb Friends Again." 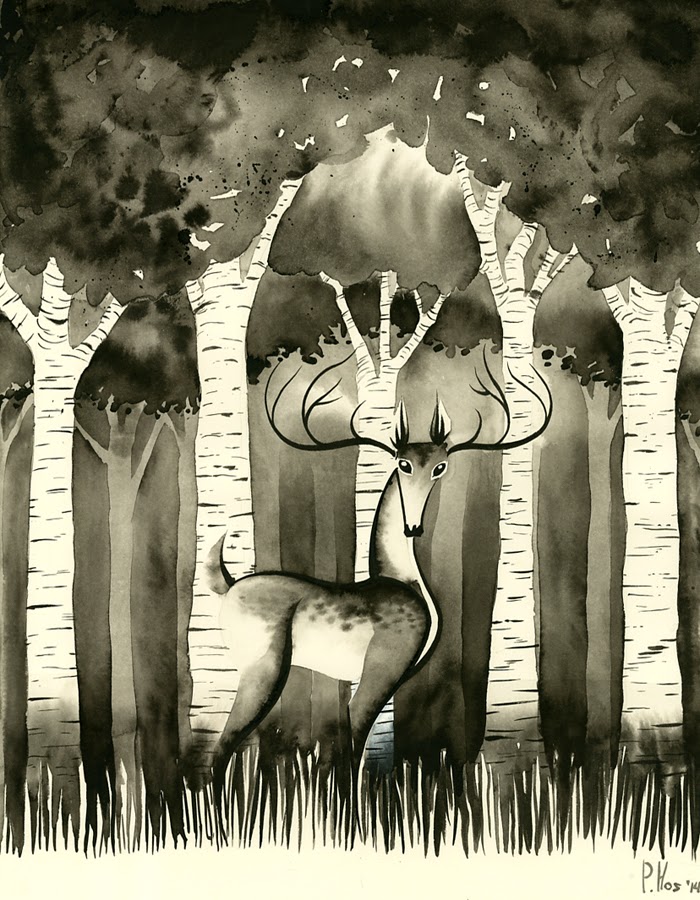 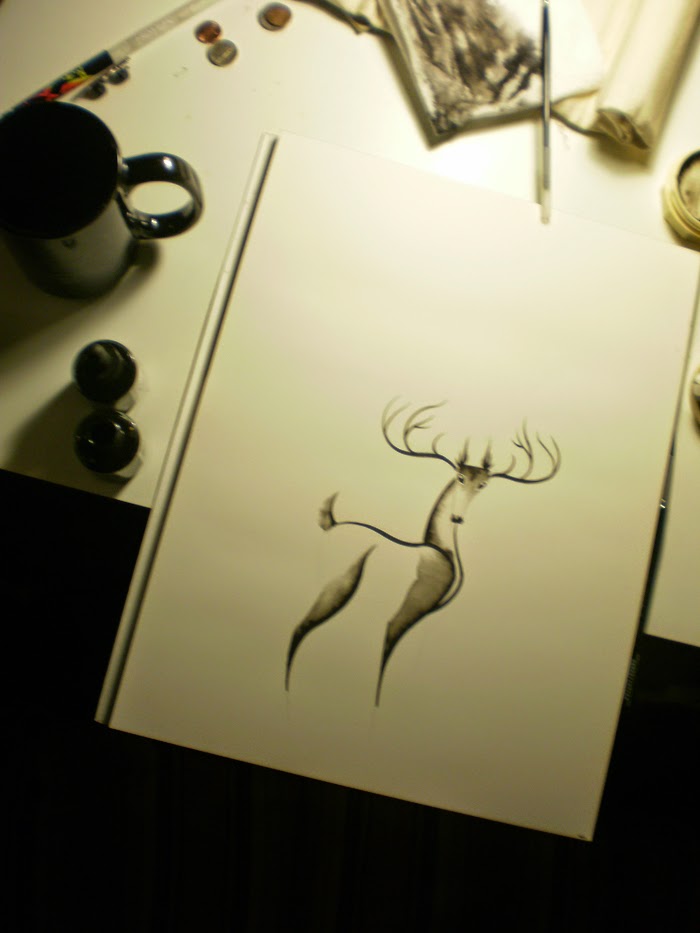 This is an unfinished experiment to see how well I can control ink bleeding on watercolor paper.  I''ve planned enough background detail that I can practice and get good at this before I try it on anything else. 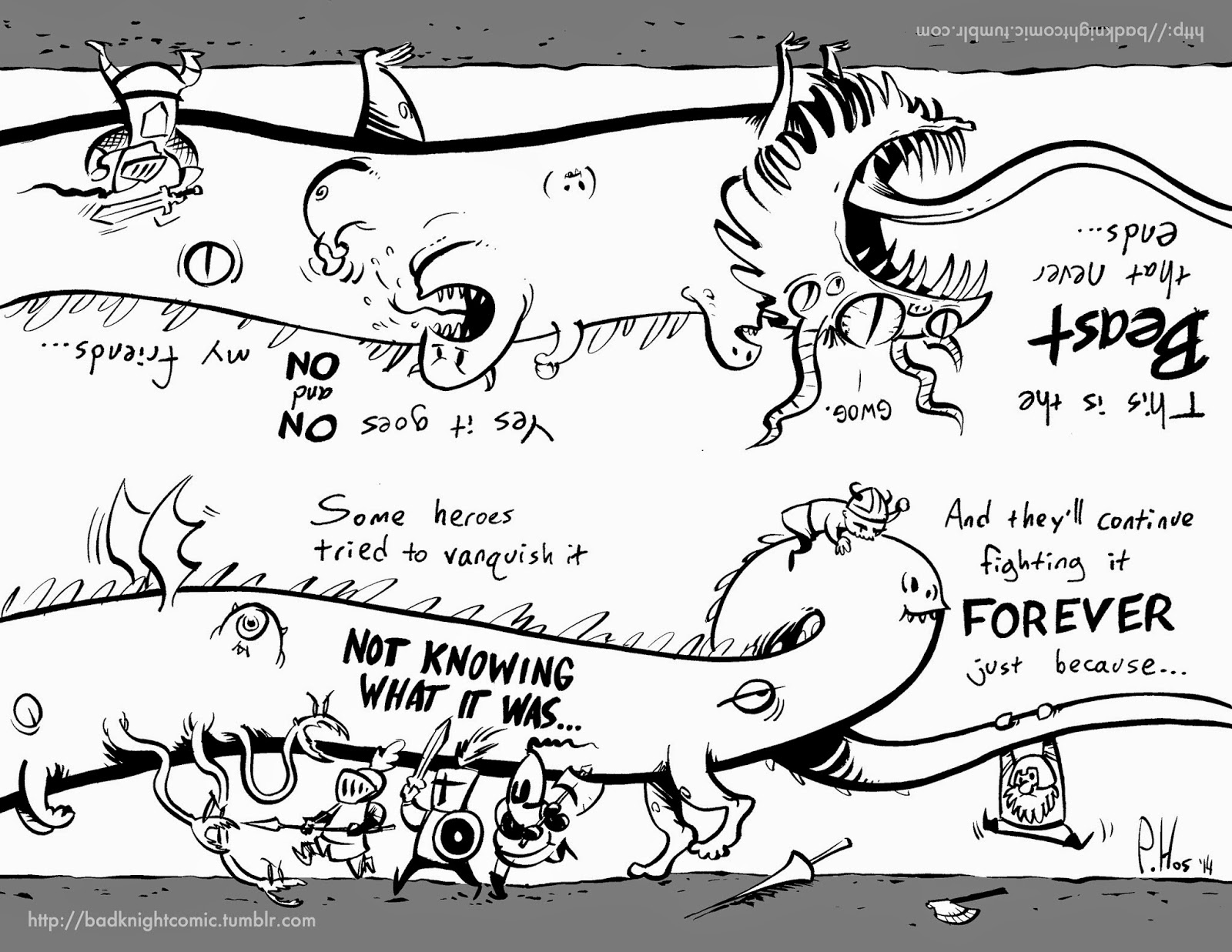 Something a little different.  This image is print-size.  Print it out and fold it like THIS:

And you have an infinite little storybook you can amuse a small child, or a person who hasn't been a child for decades but still enjoys Power Rangers, for hours.
Posted by P. Hos at 1:19 PM No comments: 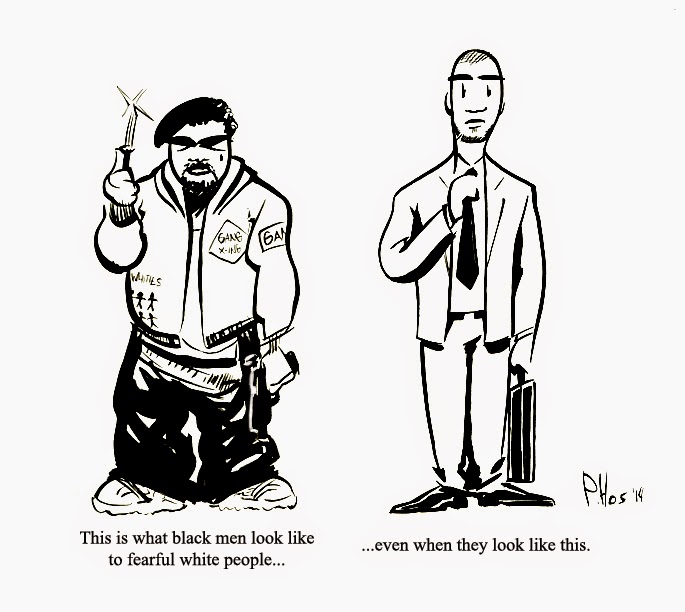 So, I was listening to "This American Life" earlier today, and they had a story about a troubled black teen who was slowly reforming himself with the immense help of charter school teachers.  Then, during a field trip, a guy on the subway bumps him and he says, "Say excuse me."  The guy starts yelling expletives and picks a fight, and only after two teachers intervene does he whip out a badge and say he's a plainclothes cop.  He arrests a couple of students who have to spend the night in jail.  Fortunately, the teen's classmates had been through this sort of scenario before and took video with their smartphones and discreetly slipped his electronics out of his pockets so the cop wouldn't confiscate them.

This coincided nicely with the segment I had seen the night before on the Daily Show where Jon Stewart tries to convince Bill O'Reilly that white privilege is a thing that exists.

With those two things buzzing around my head all day, I thought it would be helpful to Mr. O'Reilly if I made him a visual aid of how prejudice in America still affects black people.

Incidentally, like last time, I did this drawing straight.  No pencils. 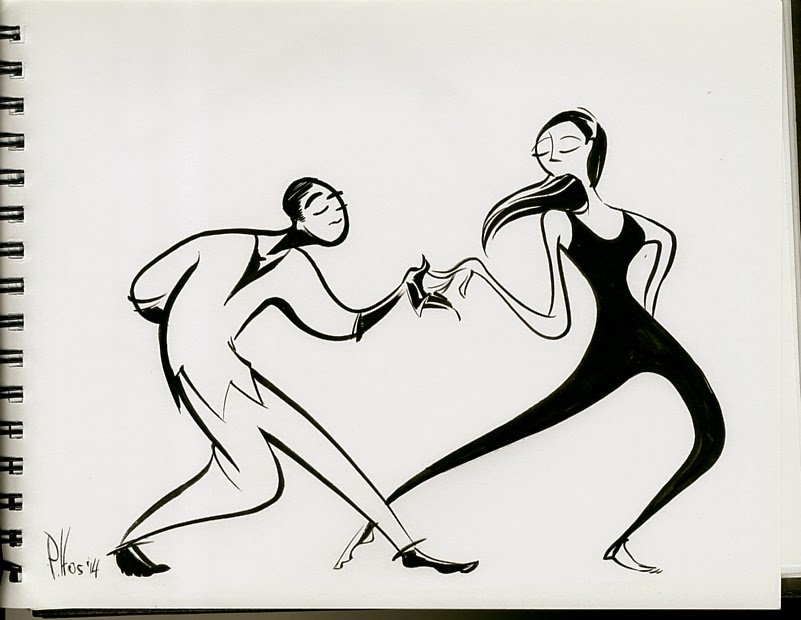 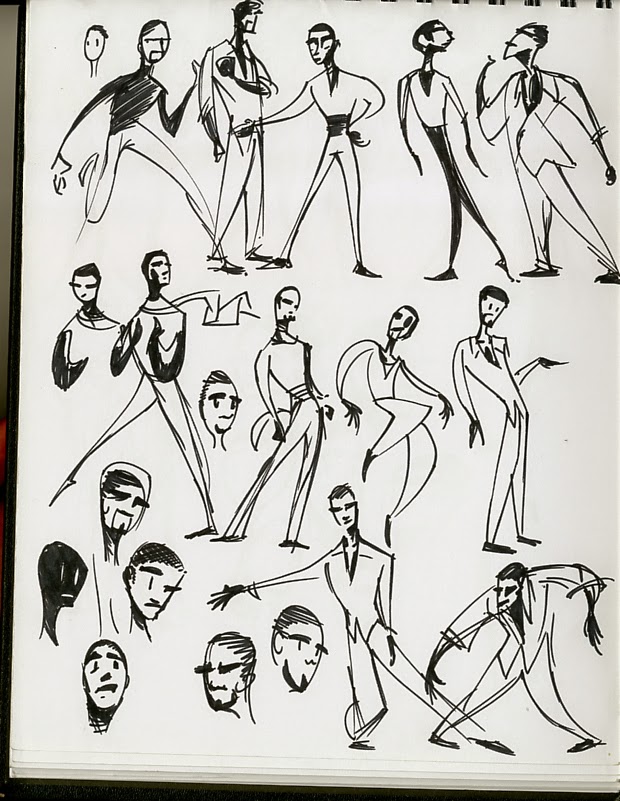 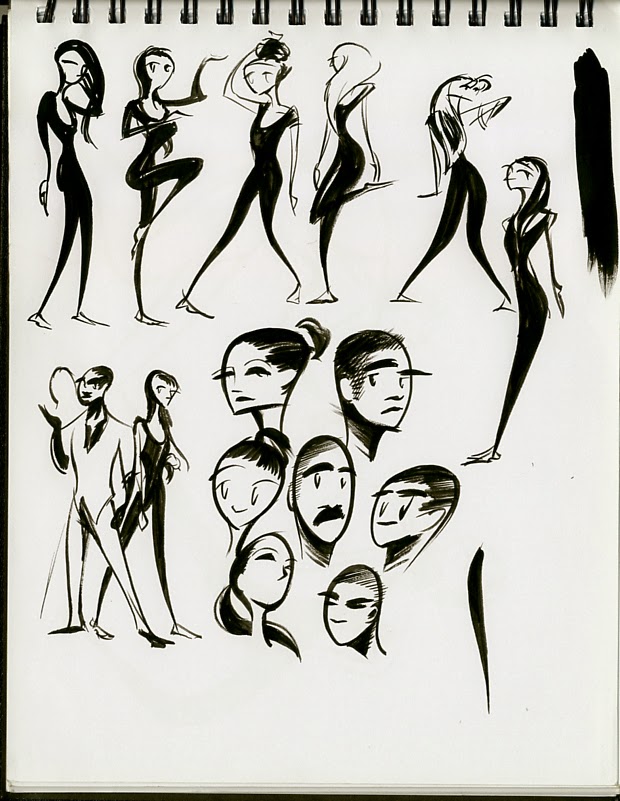 "Will You Dance" and sketches.

All of these were done with no pencil sketches, which is a skill I need to work on more, since I quite like the super-loose vibe you get from them.  Mistakes will crop up, but that's why you must not be afraid to fail and try again.
Posted by P. Hos at 3:44 PM No comments: 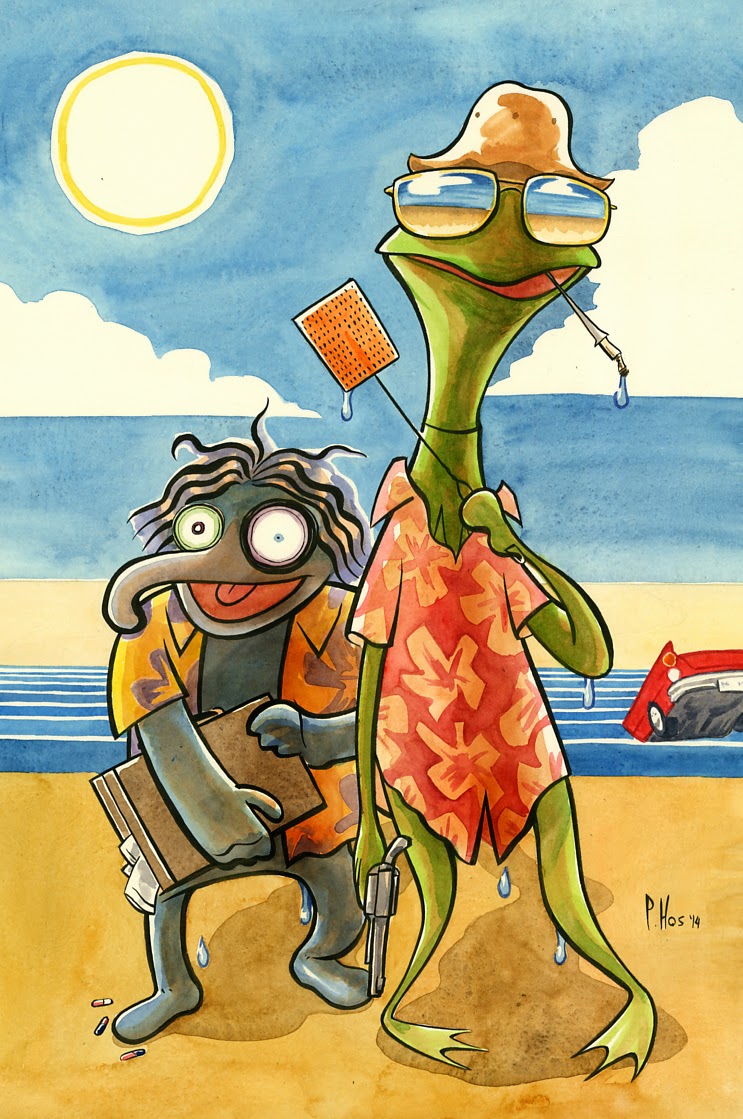 Someone wanted a Gonzo.
I wanted to practice watercolor.
Everyone wins!
Posted by P. Hos at 6:27 PM No comments: 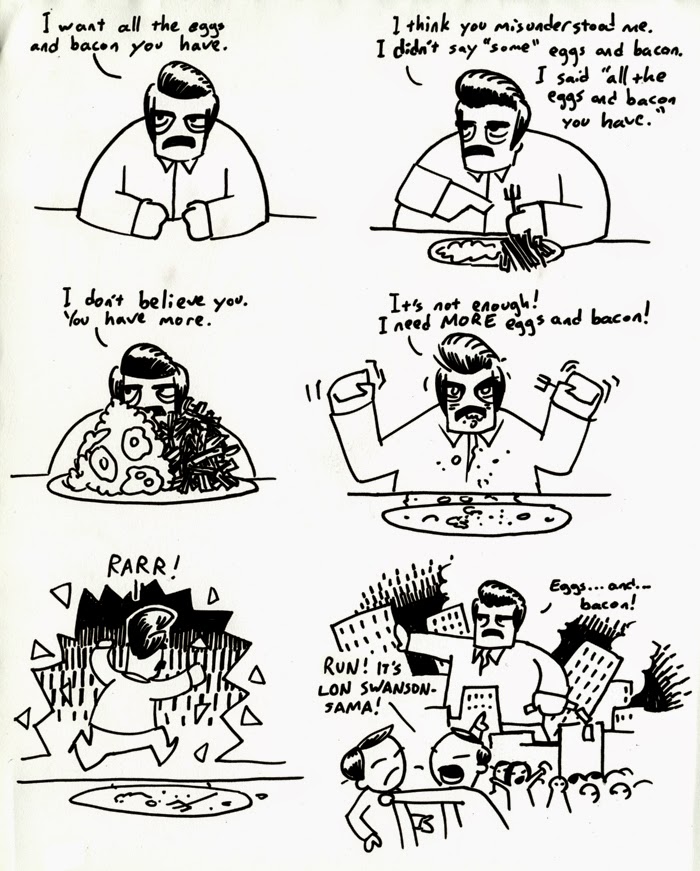 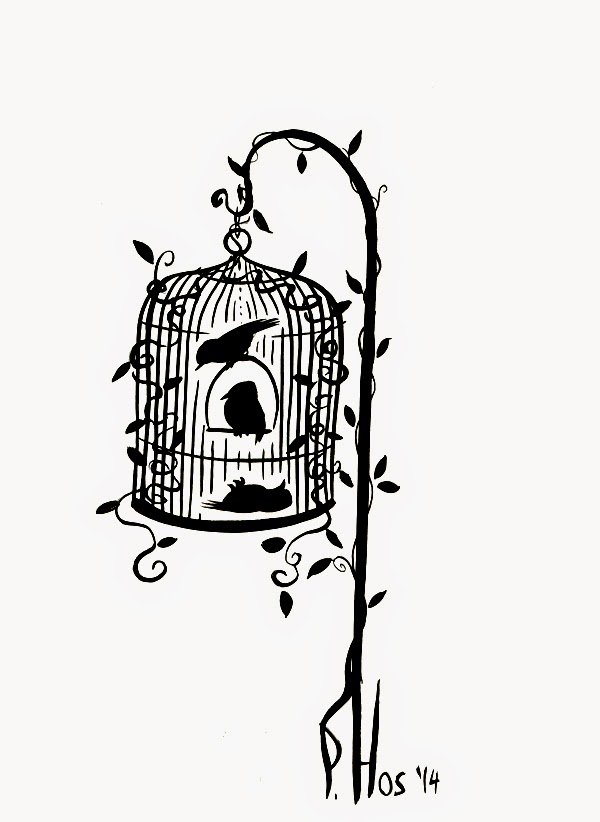 Biirds in a cadge, with vines. 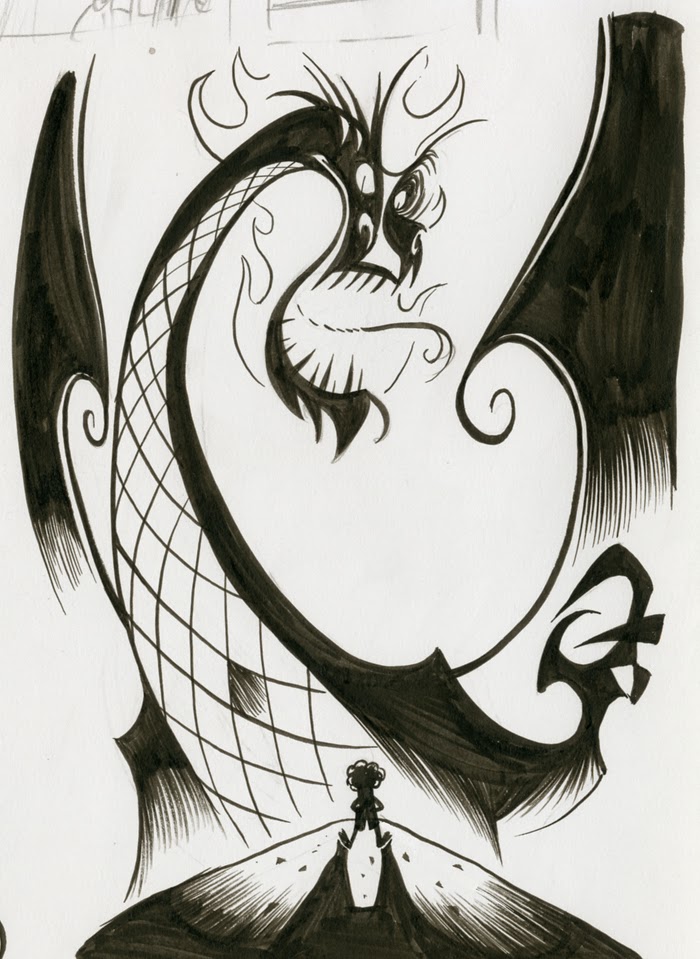 Hobbit fan art.  A little Smaug action for you. 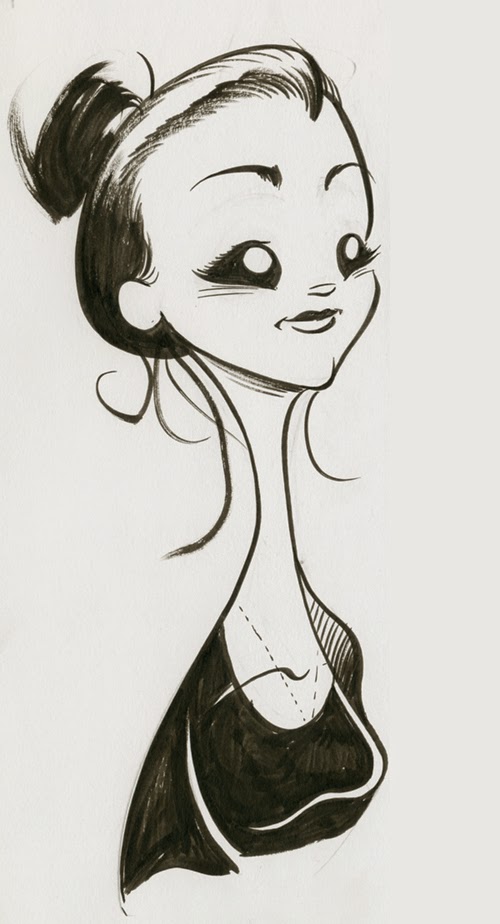 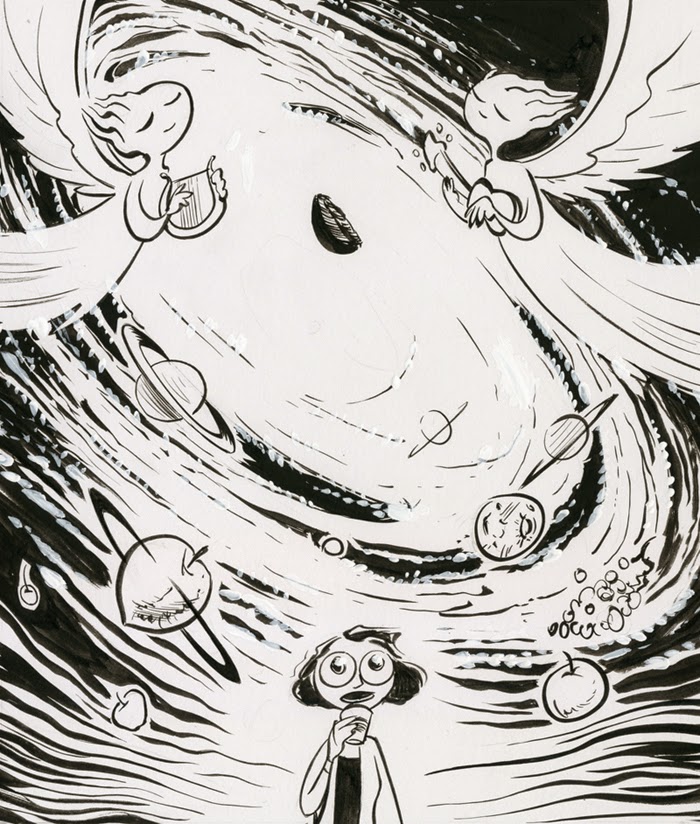 So, what exactly is my 24-hour comic about? 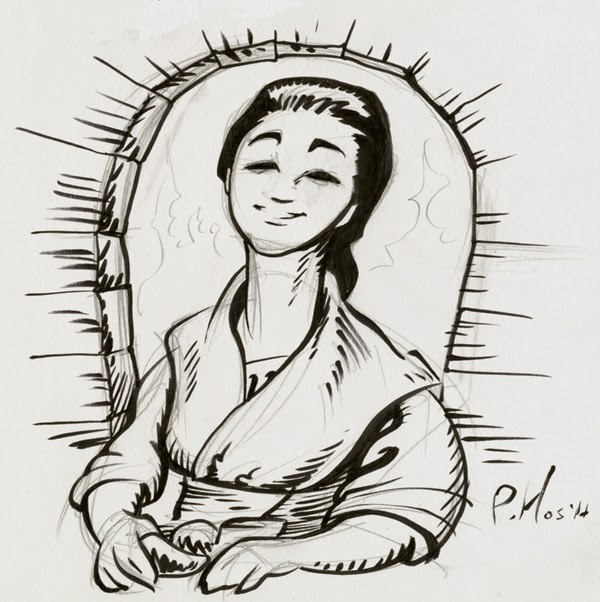 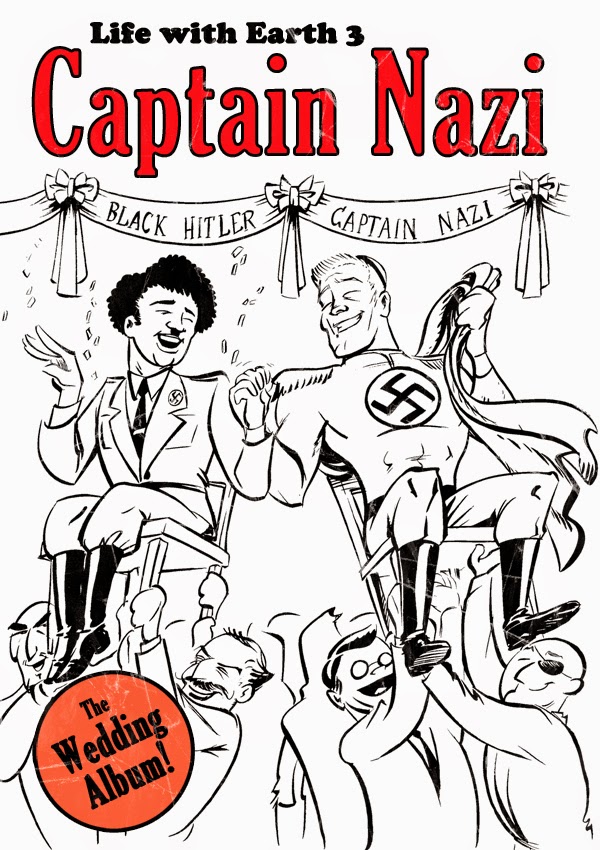 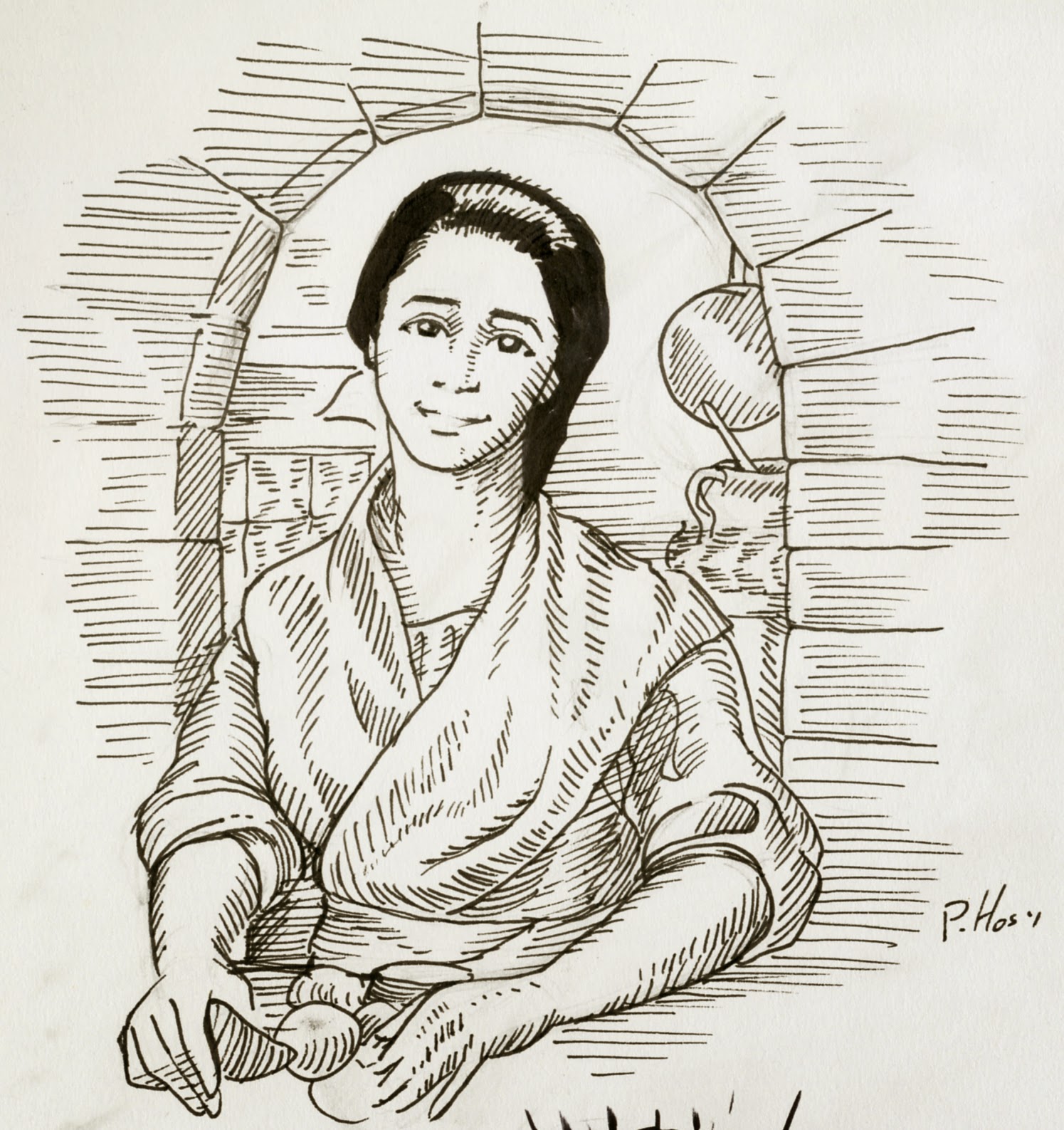 Day seven on this wretched island I have named "Inktober."  Our resources dwindle.  Last night my only source of nourishment was a bottle of Cholula hot sauce.  I fell in love with the woman on the label.  She is my angel, my last bastion against insanity.

I fear we will be forced to resort to cannibalism within the month.
Posted by P. Hos at 11:08 AM No comments: 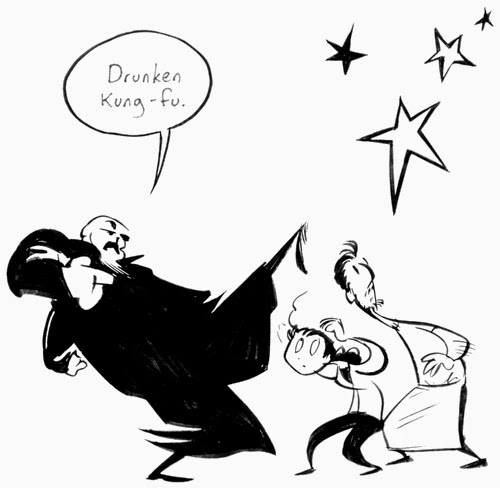 This is sort-of drunken kung-fu.  Actual drunken kung-fu uses core strength to tilt and sway as if you were drunk, while maintaining perfect balance.  You hold your hands as if they were filled with drinking cups to fight, and the whole thing is supposed to put the enemy off-guard.

The Jackie Chan movie Drunken Master is a pretty good interpretation of drunken kung-fu, except for the part where he has to get actually drunk to be good at it. 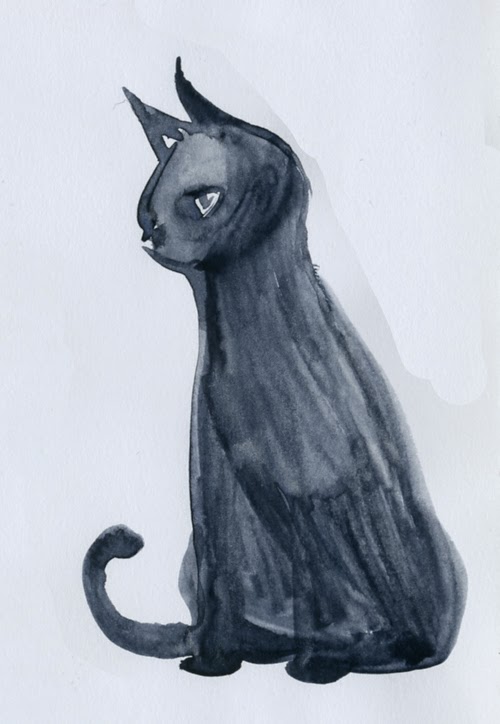 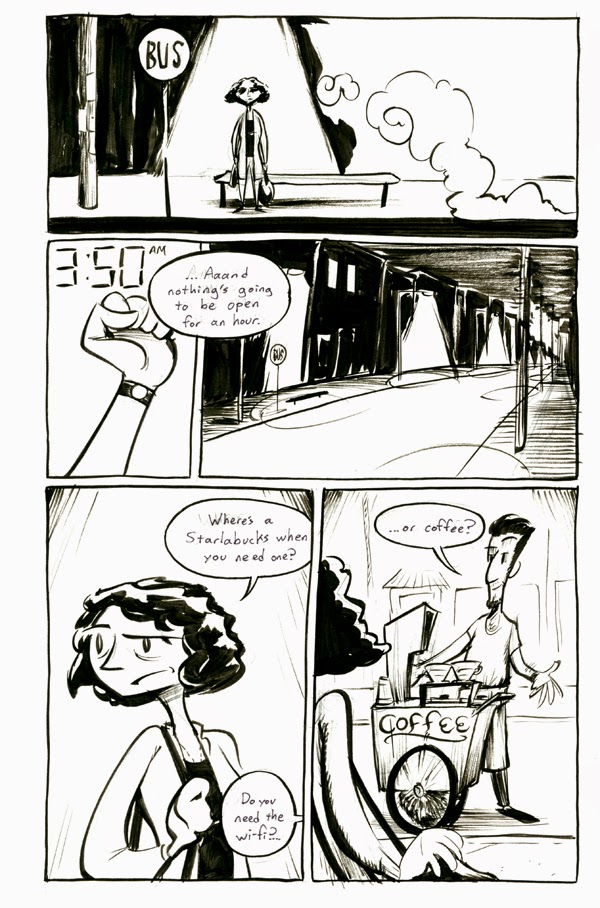 Inktober happens to happen at the same time as 24-Hour Comic Day, which means that another page is all I have the time for today.  It's a day late, but you try making 24 pages in 24 hours. 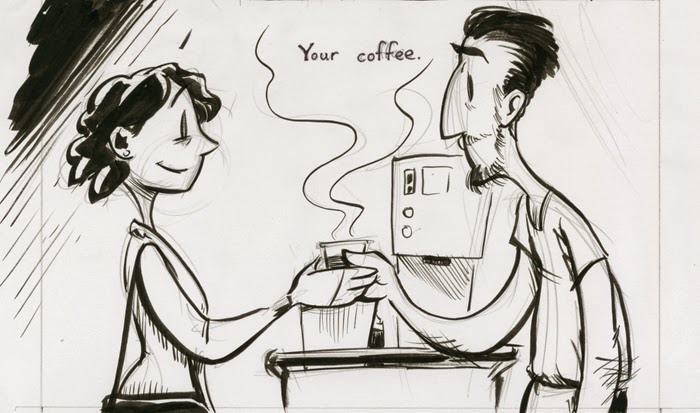 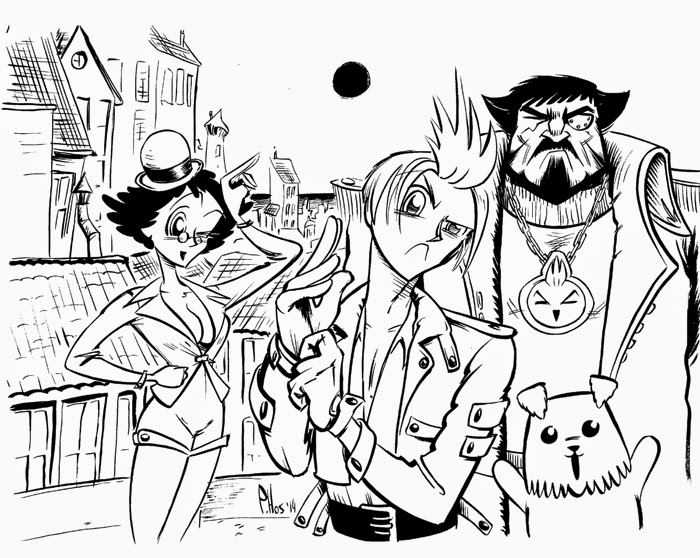 What if Tintin were revamped as a manga?  It would be terrible!  See a colored version on my comics tumblr, and at The Line: It Is Drawn.

Email ThisBlogThis!Share to TwitterShare to FacebookShare to Pinterest
Labels: anime, illustration, inktober, manga, the line it is drawn, tintin

Inktober is a National Month of Thing in which those sufficiently motivated complete and post one (or more) ink drawing every day on October.

I start a day late, and make up for it with two ink drawings.

The second one was inspired by a Tom Robbins metaphor about the kind of cheese Lima, Peru would be if all cities were equated with types of cheeses (Swiss on a waffle.  I assume Zurich would be Swiss Cheese on Swiss chocolate, as prepared with Swiss army knives.)