Who watches the Watchmen movie? 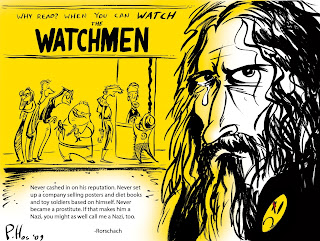 I know how excited people are about the new Watchmen movie, but I'm not going to see it. I refuse to watch it ever. The following are my reason for doing so. If any of them make the slightest bit of sense to you, I urge you to consider boycotting the movie as well.

1. Alan Moore disapproves of this movie. He's the creator of Watchmen. If he doesn't want his creation whored for the silver screen, it should not be.

2. Alan Moore doesn't own the rights to Watchmen, but he should. DC's contract stated that the rights would revert to him and Dave Gibbons three years after Watchmen out of print. This was before graphic novels. This was before any comic had ever been in print for more than a few months. It was a reasonable deal at the time, and DC changed all the rules, gypping Moore out of what morally should have been his. Watchmen is stolen property.

3. Zach Snyder is not a good director. His only previous movies were 300 (stupid and easy) and Dawn of the Dead (hyperactive and mediocre). I don't trust him with Watchmen.

4. Watchmen was scripted and drawn to be unfilmable. It uses conventions and and has a depth that only a comic can pull off. Any adaptation in any form will be lackluster in comparison.

5. Being a comic, when I read Watchmen, I had sort of a movie in my head of what was happening. Tying to the previous two reasons, I believe that my imaginary version of the movie is superior to Snyder's by leaps and bounds.

6. I believe that everyone who has read the book has such a movie in their heads. Snyder's adaptation will all but erase that. Sad as it seems, our imaginations can't compete with the splendor and bang of the big screen. A hundred thousand unique visions of Watchmen get consumed by Snyder's and the world is poorer for that. I liked your version better than his too.

7. If we're really honest, the only reason this movie is being made is because it will make money. Your money. DC is turning it into a franchise, and using the opportunity to put out all the merchandise that Alan Moore AND Dave Gibbons had the power to veto under their contract.

8. This movie is not necessary. In fifty years, people will still be enjoying the book. I doubt people will gush equally over the movie.

9. First Star Wars. Then Indiana Jones. Next I hear that McG is slated to direct Twenty Thousand Leagues Under the Sea. Must Hollywood take my childhood and ruin every bit of it?

10. We can stop them by not spending money on this. 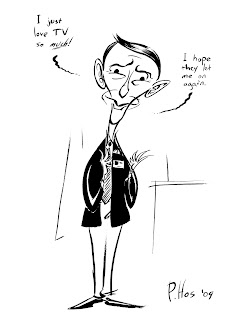 Bobby Jindal speaking to the nation last night spurred my brain. At first, his halting talk and soft southern accent just sounded patronizing to me. Then I realized he was actually imitating Kenneth the Page! I imagine it's the Republicans' insidious plan to slowly replace the entire cast of 30 Rock with clever look-alikes. I suppose Michael Steele is the closest they could come to Tracy Morgan.
Posted by P. Hos at 7:11 PM No comments: 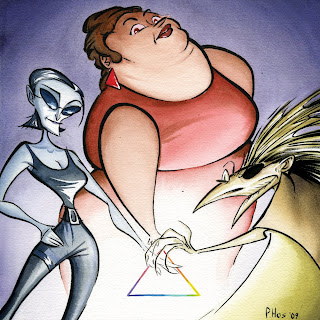 I'm starting a new book. It's a number book, like they make for kids: "Can you count three penguins?" but for adults, or, more specifically, me. I research and explain, in what will hopefully be eloquent and near poetic prose, the history, culture, and philosophy behind all the digits, plus a few special numbers like 10, 12, 13, 23, pi, and infinity.
Posted by P. Hos at 5:29 PM No comments: 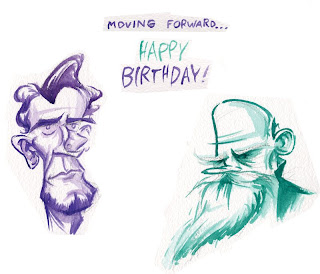 Yesterday was the 200th Birthday of Charles Darwin and Abraham Lincoln. Two men who are both responsible for moving forward the thinking of the human race, and who, through some divine cosmic coincidence, also have the same birthday.

The rest of the world salutes you fellows.
Posted by P. Hos at 2:59 PM No comments: 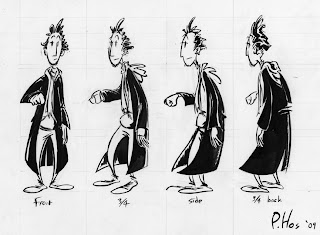 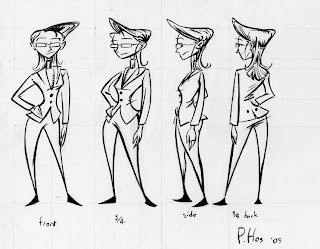 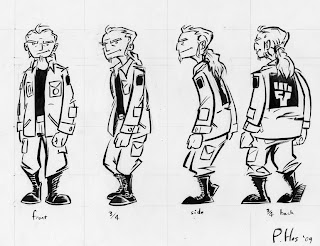 turn-arounds for three of my four main characters: Guy, Daphne, and Rodney.

Interesting side note: each one took almost exactly one hour to complete.
Posted by P. Hos at 12:10 PM 1 comment: 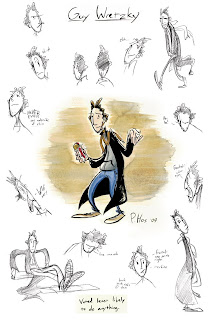 Okay. I'm starting a graphic novel. Coincidentally, I'm also in a concept design class at the same time. So while I really should take more time to write (it's no excuse, but I'm really, really busy) I have created a lovely looking character sheet here. Turn-arounds are due on tuesday, so those might show up later. As well a plot.
Posted by P. Hos at 10:41 PM No comments: 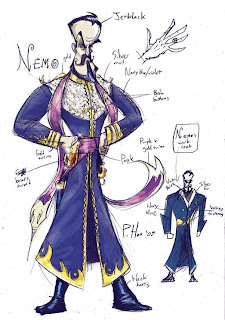 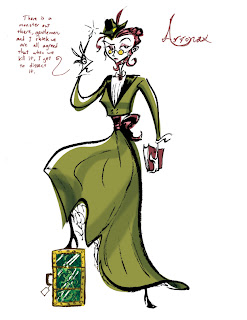 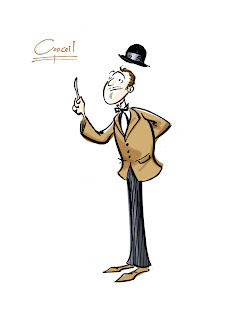 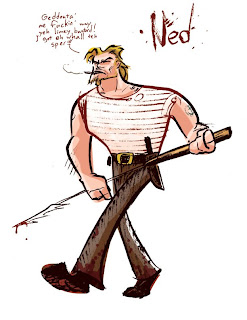 I'm in a concept illustration class right now, working on a faux-animated version of 20,000 Leagues Under the Sea. So, here are my designs for the main characters. To round out the cast, we made Professor Arronax a female. Verne would take it in stride, I think.
Posted by P. Hos at 10:29 PM No comments: