Shazam: It Is Drawn 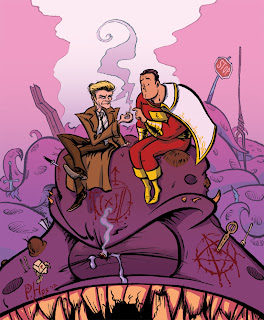 In honor of the passing of one of the last great Golden Age Marvel Family creators, Marc Swayze, this week is all team-ups and/or mash-ups of comic book characters with characters from the Marvel Family.


Can you spot all of the hidden references?  Of course you can.  But can you identify them?
See the good folks and others HERE.

Email ThisBlogThis!Share to TwitterShare to FacebookShare to Pinterest
Labels: captain marvel, constantine, hellblazer, shazam, the line it is drawn

The Line It Is Drawn: The Vampire Slayer 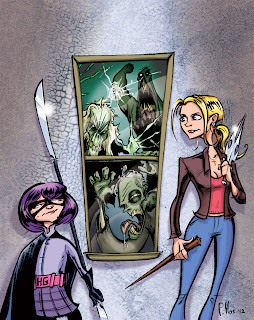 Meanwhile, over at Comic Book Resources...

In honor of the 20th Anniversary of Buffy the Vampire Slayer, suggest team-ups/mash-ups with comic book characters and characters from the Buffyverse.

Alan Moore fan that I am, I couldn't resist dropping in a little Swamp Thing/Arcane mishmash in the back there.
Posted by P. Hos at 11:21 AM No comments:

The Line It Is Drawn: The Animated Series 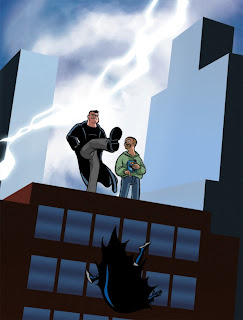 
Ennis’ The Boys in Gotham


If you look close, Wee Hughie there is holding a (pirated) copy of The Dark Knight to be autographed.

A Line Done Got Drawn

Up on Comic Book Resources:

"Based on a suggestion from Thea, mash-up comic book characters with the plays of William Shakespeare. Batman as Hamlet, Luke Cage as Othello, etc.
Enjoy!

I’ll put them in alphabetical order based on the name of the Twitter user who made the suggestion.
All copyright and trademarks of the following characters are held by their respective owners!
First off, though, let me note a fond farewell to Jason “Gonzo” Gonzalez. Jason’s a really busy guy and has had to take a few months off in the past, but this time around he just doesn’t see himself being able to get back into the swing of things in the future, so he decided to withdraw from contributing. We’ll miss you, Jason! You were awesome. Be sure to keep track of his awesomeness at his website here. Nature, of course, abhors a vacuum, so at the end of today’s installment you’ll meet Gonzo’s replacement." 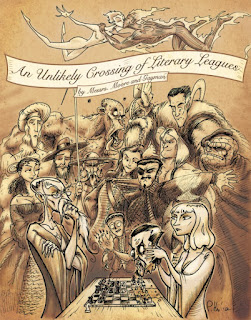