And you thought Ben Affleck was a joke... 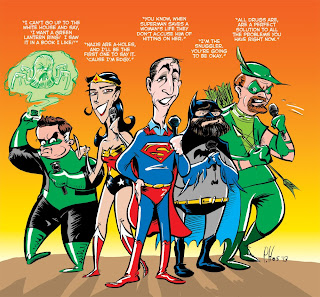 From The Line It Is Drawn, five of my favorite living comedians as the Justice League, inked in loving detail, and shittily colored.

From left to right, there's Patton Oswalt as the Green Lantern, Sarah Silverman as Wonder Woman, Jerry Seinfeld as Superman, Zach Galifianakis as Batman, and Louis C. K. as the Green Arrow. 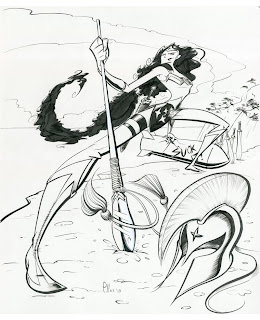 My take on Wonder Woman.  I put her hair in a ponytail so it wouldn't get in her eyes, gave her some straps on her leg to attach swords or canisters of bear spray, put some straps on that top of hers, so it wouldn't fall down in battle, and gave her a miniskirt, which is more stylish than the Greek-style leather-skirt people keep thinking is a good idea, and more functional than hot pants.

Originally, she was also going to be surfing on top of a Steve Trevor-piloted jet (hence the giant missile) but then I remembered I don't know how to draw jet planes in perspective.