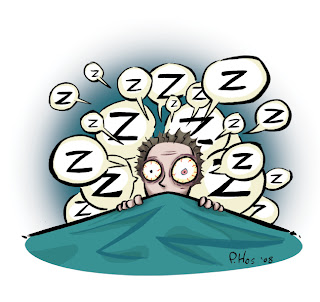 I recolored this recently. It's from an issue of the South magazine I was in.
Posted by P. Hos at 6:47 PM 1 comment: 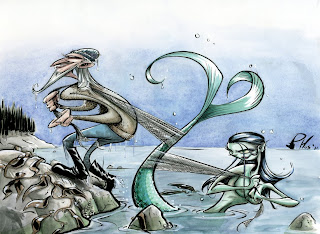 I was wearing a Hawai'ian shirt the other day and just felt tacky. Good tacky. Topless mermaid tacky. I decided this takes place in Northern California, though originally, I had been thinking of Maine, and even had a lobster trap tied up near the shore. Blue, green, and grey seem to make everything look wetter, don't they?

This one goes out to Norman Rockwell and his "Fair Catch," and the brisk trade the Atlantean Victoria's Secret apparently does in Disney movies.
Posted by P. Hos at 4:46 PM 1 comment:

After a week's hiatus, during which I drew, but did not post, I return. 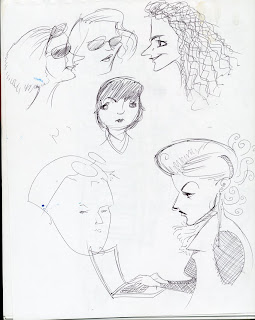 The first page actually is from last week. We see here from left to right and top to bottom, a few women standing in line for their expensive fancy foreign-sounding coffee drinks, an off-duty employee, a reader, an attempt to draw with my left hand, and one of the most shockingly beautiful people I have ever met. She looked like how movie stars look in magazines after photoshop, so of course, I went and made her look all nutty and caricatured. Everyone's the same on paper.

And today, sitting outside on the mall, I notice that the view would make an excellent panorama, and that most everyone was involved enough in what they were doing to stick around for that sort of thing. Exceptions: the third fellow got a female companion (not shown), the fourth guy decided to read a book after I drew him, and got up and left as I was coloring him, and the girl cluster grew by at least one more person, and then diminished by two as time went on. You'll notice that the girl on the left is the same off-duty employee who is on the above page.I admire her consistency for hanging out in the same place she works. 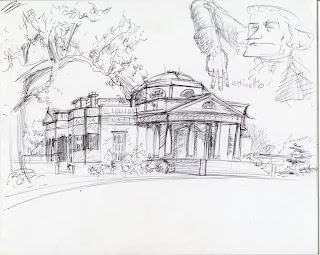 And then I went to Monticello, seeing as how it's only 3 miles away from my house and I know one of the tour guides (thanks, Katy) who promised me a secret tour of Jefferson's rec room (what that dome actually is) and administrative offices, and who's leaving for college next week, so my window of opportunity was limited. I brought lunch; a tomato sandwich, pretzels, cheez dip, and ginger ale, read the newspaper (comics), took my socks off and drew this. I snagged a few spring onions and parsley leaves from the horribly unkempt garden, ate a Jefferson snap pea off the vine, wondered about the nonexistence of the Jefferson hemp plantation, and came home at closing.

The day after the Rapture was always going to be a good one.
Posted by P. Hos at 3:54 PM 1 comment: 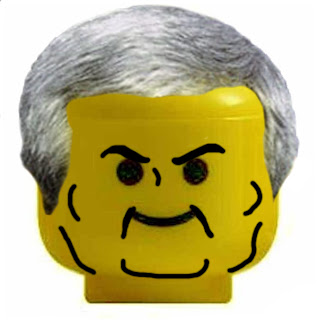 Jon Stewart is right. He does look like a real person.
Posted by P. Hos at 5:13 PM No comments:

Well, slightly different strategies this time around. These first two were done, not in the Mudhouse, but in th Twisted Tea Bazaar, in the Hookah room, while sitting next to a gorilla and wearing watermelons on my feet. Actually, those last two are lies; everyone knows shoes go on you feet. 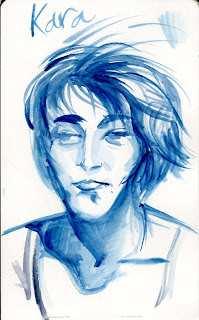 Right, I was very excited to do this particular portrait since Kara (yes, see, that's her name) actually had blue hair that matched my blue paint. Since the rest of her didn't match any paint I had, blue goes it. 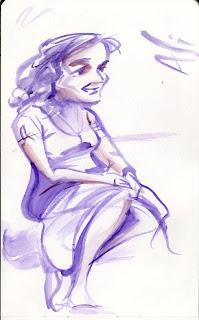 On the next page is Ali, who I drew next because she seemed to be the most conscious that I was drawing people (except for the guy with the huge nose who noticed my sketchbook and ran away; smart fellow). You just can't ignore that, even though the other girl I was sitting with had feathers adhered to her hair, and the guys were both making the most hilarious faces. 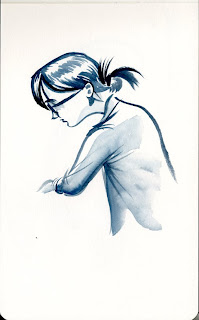 And then I went back to the Mudhouse on Sunday, the day after the Tea Bazaar drawings. These are usual-style sketches, which I honestly don't have that much to say about anymore. 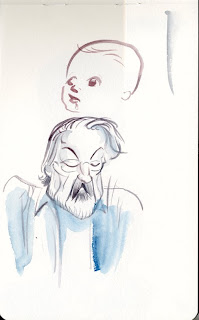 I've noticed a tendency I have to allow people hair to get away from them. 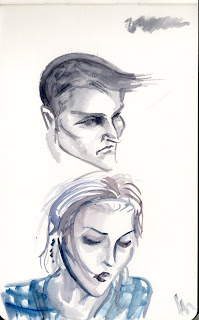 He was Indian, she looked less like Lady Gaga than pictured here.
Posted by P. Hos at 1:08 PM No comments: 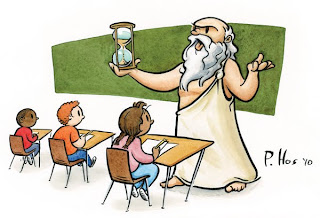 This piece showed up in the Utne reader a few months ago. By the way, that's Socrates. Look it up!
Posted by P. Hos at 4:15 PM 1 comment: 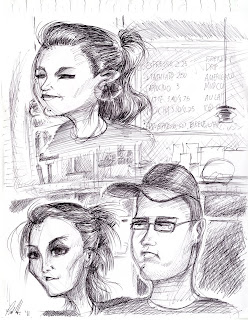 I wasn't entirely sure if I'd be drawing today. I'm getting kind of bored with it. Going, drawing, leaving. Same thing every time. I only did one page this time, of the baristas on the other side of the room, serving people who constantly got in my line of sight.

This is going to go up on the Mudhouse wall, even if I have to tape it there myself. But I'm showing it to you internet people first.
Posted by P. Hos at 12:00 PM 1 comment: