The Line: It Is Gonzo 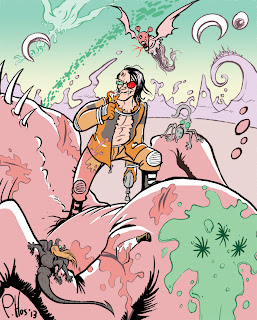 From The Line: It Is Drawn.  It’s the great comic book amalgamation of 2013! Pick any two comic book characters and our artists will combine them into an, you know, amalgamation! Just like when DC and Marvel did it in the 1990s (Superman and Captain America became Super Soldier, etc.)
DJStinky suggested:


Most of the monsters don’t mean anything, but if you look carefully, the grey one in the foreground is a wig monster from John Dies At The End.

Email ThisBlogThis!Share to TwitterShare to FacebookShare to Pinterest
Labels: comics, illustration, Prophet, Spider Jerusalem, the line it is drawn, Transmetropolitan

The Line: It Wants to Be Anarchy 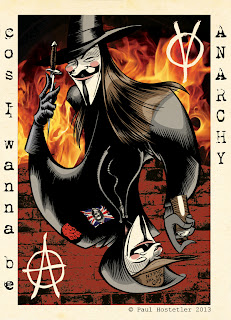 Never let it be said that  tools don’t matter.  They really do.  I use The Line: It Is Drawn as sort of an experimental leap pad for new techniques and general practice, and I have to say, no brush in my collection besides the Windsor Newton Kolinsky Sable Series 7 #4 could have done the hatching in this piece half as well as it turned out.

A little on the topic: it started out as illustrating a comics character with a song lyric, in this case, from the Sex Pistols.  I thought it was a brilliant match, and decided to add a few more elements to the mix: namely, a political angle and a playing card theme.  They seemed to fit together on paper, so I went with it.  Incidentally, given that the “A” is not the same as an upside-down “V” this does not work as an actual playing card.  Even without the lyrics running down the side, which I almost forgot to put in.  I don’t apologize for the stock art background.  I didn’t think I’d be able to do my planned composition justice in the time before it was due. 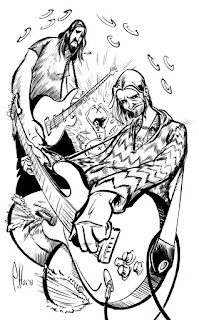 I did this one Friday night a few weeks back, at the request of one of the baristas in the coffee shop where I hang out.  So forgive me any mild guitar inaccuracies; I had no references. 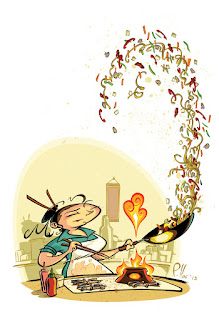 And after tweaking.  Not too much has changed, but the vegetables have more form now. 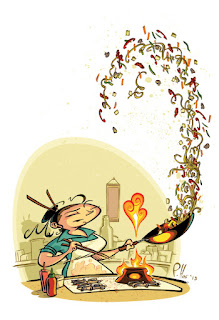 After (most of) the digital coloring has been done, here's what we end up with.  I may tweak it further, especially with the  flying vegetables, just to give them a little more body and play with the lighting some, but this is the first stage you can actually compare it with the original on the bottom here. 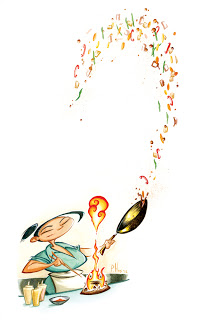 The Line: It Is Such A Dork 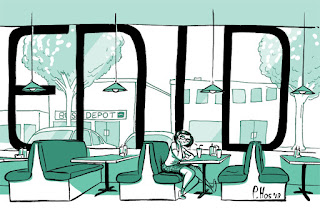 For The Line It Is Drawn, Enid Coleslaw from Dan Clowes's classic, Ghost World, illustrated with the jumbo background name thingy patent pending Will Eisner.
Forgive me any small perspective errors; this was done entirely without rulers or straightedges.