Friends Who are Cold

If there's a theme to the sketches this week, it's: "What the hell?! It's snowing?! Two weeks ago I was playing frisbee on the mall with no pants on! This requires coffee." I gurantee something like that was running through everyone at the Mudhouse's mind at some point this morning. So you get another bunch of people wearing sweatshirts and scarves. 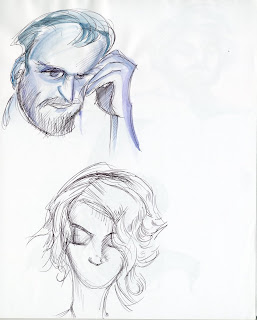 All right. I like to start off by loosening up, like an Olympic runner, or a green rubber band. That's why the fellow on top has a head shaped like malformed croissant. The bottom show my fourth (?) unsuccessful attempt to draw this woman. Seriously, I got this far, then a girl with really big hair comes and sits in front of her, and then she leaves. Do you see?! Do you see what happens when you leave!? 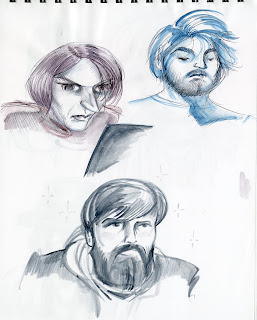 In between not finishing people, I did these people, the top two being lit most magnificently from their laptops. Aware of my sliding hand during the drawing process, I'm just going to go ahead and say that the woman looks "Picasso-esque". The Beard (that's his name now: Beard) has devoted his entire life to displaying his powers of lustrous hair growth to the world. Even his eyelashes blew around when someone opened the door. Clearly, he was a wizard, so I put sparkles around him. 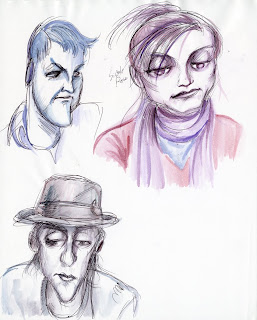 And our last batch of folks here represents characters from places as far away about seven yards from me. One thing about it being cold is that a lot of people who would otherwise have gotten their coffee to go and drank it while riding wild stallions up sheer cliff faces suddenly found themselves exchanging blows and razor cuts over the few empty seats in the Mudhouse. I got my seat by tripping two nuns, a pregnant woman, and a legless orphan. The smug looking guy on top looks that way because he got a table all to himself, near an outlet for his laptop too. The girl, who name is apparently Rose, as overheard through an introduction by her sister to a fellow with glasses and a suit, who, let's safely assume, works at UVA. Now at that point, I was ready to go, but there was still an empty space at the bottom of the page, and a high school girl sat down at the empty seat at my table and we started talking about experiences drawing people in public, and hell, that guy wasn't moving too much, and he had a hat on, so why the hel not draw him, huh? He actually came over and complimented the likeness, which is cool, and I gave him a card. If he cares to identify himself in a message, well, that's cool, but I won't give him candy or anything.
Posted by P. Hos at 1:55 PM 2 comments: 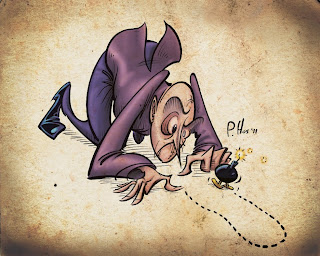 Outside, with butterflies and crap

It was nice outside today, and since it's March, I had no reason to blame global warming. It's just Spring, y'know. That, and the fact that there were only three people inside the Mudhouse (including Daniel Day-Lewis/Eastwood, who had gotten a haircut, but that didn't warrant as interesting enough for me to stay inside when it was perfect outside. 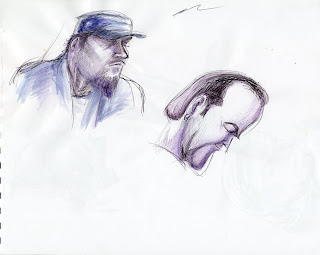 Across the way, there was a guy across the street reading at a table outside the movie theater. He looked exactly like that guy from "It's Always Sunny in Philadelphia," which, replacing the city, is kind of fitting. 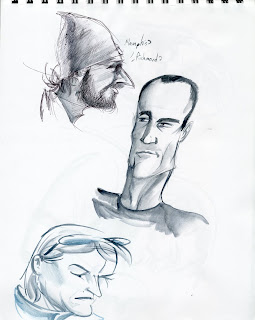 And more in celebrity look-a-likes, Ringo Starr, Martha Stewart, and possibly Jack Johnson. Jack and Ringo were talking about the book Jack was writing about urban engineering. And you thought he only played guitar. Oh, and Ringo actually had a real British accent. 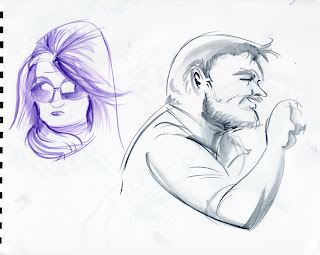 Okay, so there aren't that many tables outside the Mudhouse. After Ringo, Jack, and Martha, there wasn't anyone else to draw. I traversed the downtown looking for other clusters of people sitting down, and found one outside the Nook Diner, which conveniently had non-restaurant seating right next to it. The purple lady had red hair, and like everyone else who was looking for an excuse to be downtown today, was reading. The bearded fellow was eating with his friends in the outside dining. One of them was planning a wedding. 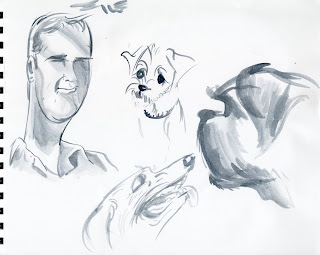 At which point, I became bored and decided to just draw people's dogs instead. The hyper-looking lab belonged to a friend of the oval-faced guy. That lab was really excited about the arrival of Biscuit, the terrier. I forget what kind. The terrier got even more excited about the arrival of the Newfoundland, Godfrey, which is the perfect name for a bear. All dogs are drawn to scale.
Posted by P. Hos at 12:19 PM No comments:

Three Fat Pigs in the Middle of the Road 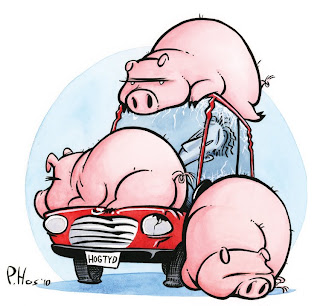 New piece for The Utne Reader. Fabulous prizes if you can guess what the article is about without reading it.
Posted by P. Hos at 8:56 PM 1 comment:

It was raining today, which left out biking. Being a stubborn goat, I walked, and got my feet thoroughly soaked. I didn't care, though, since for the entire 20 mintues from my house to Mudhouse, I had "Singing in the Rain" stuck in my head. If it weren't for the stachel of precious, precious watercolors on my shoulder, I do believe I would have eschewed the umbrella and splashed, Gene Kelly-style, all the way there. 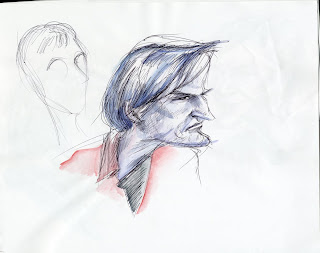 This guy existed last week, which is good, since it would worry me if people were born looking like this. I decided today that he looked more like a craggy Daniel-Day Lewis/James Brolin than Eastwood or Bardem. I tried something new too, with a ballpoint pen, or the mention that my stuff sketching doesn't look like the swoopy, cartoony stuff that I usually draw. I knew that. The pen frees me up tremendously. Lines are cool. 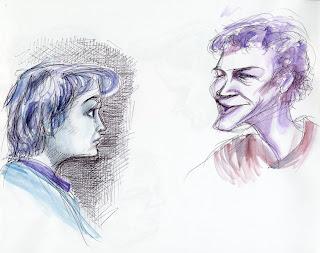 There weren't too many people in the cafe today, because of the rain. But these folks were at the same table. The girl was interviewing the guy on Strathmore college. Or Swarthmore. Whichever one is in Philly. She wanted to know everything, from the tools in the engineering dept. to the phys. ed. requirements to the microwave situation in the dorms to which local acts (local to Philly) would play at the college. The guy kept up pretty well. To give you an idea of how long they went at it, I started after they started talking, and finished drawing an hour before they left. 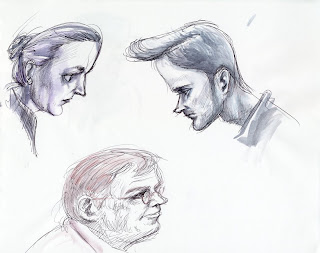 It occurred to me around this point that while certainly my favorite caricaturists are guys like Steve Brodner and Gerald Scarfe, when I pick up a ballpoint pen, the results look more like Edward Sorel. The guy at the bottom moved before I could get to watercolor. His head was alot skinnier from the front. 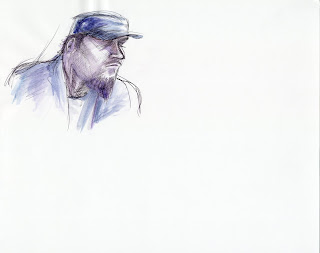 This was, quite literally, the last person in the cafe that I could see. There was a couple behind me, but both their faces were obscured, and they were behind me. So I finished this guy, and left. On the way back, I stopped at the Market Street Market and bought a zucchini. Sarah, the girl I drew last week, left before I got there for an exciting career in massage therapy, and the fellow who replaced her was not as photogenic. Good luck, Sarah!
Posted by P. Hos at 11:59 AM No comments: