I got a new seat in the Mudhouse this week. One by the window instead of the back. As a result, all of a sudden, everyone wasn't backlit. This made for more line-intensive drawings.

I also put enough sugar in my coffee to make a little slurry in the bottom that was too cold to entertain lapping up. 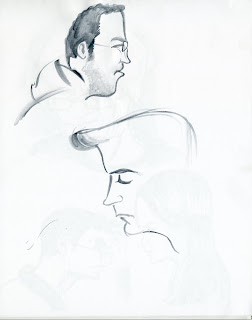 I started with the fellow on top, who stayed at the same seat, diddling away on his laptop the entire time I was there. The half-finished fellow found another seat with his girlfriend before I could complete him. I would have started with his girlfriend too (she had glasses) but she had the annoying habit of noticing me when I was working. Screw you. 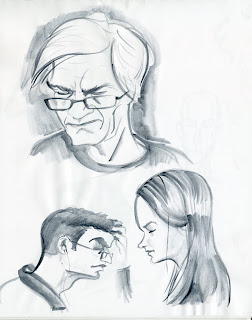 The moptop there with the eyebrows had the audacity to ask to sit at an occupied table! Imagine! There was a guy at the table, and this bloke asks if he can sit there and read his book, and he does, very intensely. He had Andy Warhol/excited composer hair, and a minute or two after drawing him, I noticed that I made him a little lopsided. The guy on the bottom looked like the son of Jeff Goldblum, so I had to draw him. And the girl looks almost/not really like someone I work with. 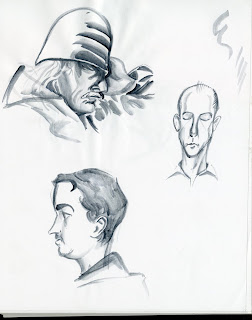 Midway through my visit, this bloke comes in, plops down on the couch and falls asleep like a cat in the sun. He stayed absolutely motionless for the better part of an hour, and he had a mustache. Of course I drew him. The thin man I've seen before, the past two weeks. He's probably working on a book or something. Far as I can tell, there aren't too many people who come in week after week, routinely. Just me and him.

There can only be one... 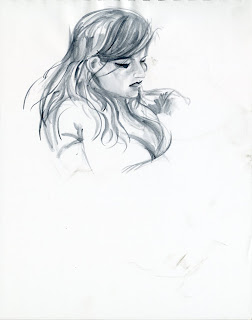 I was getting around 1, and I was thinking about leaving, but the paint was still wet, and my drawing finger was still itchy. Like an angel from heaven, or, more realistically, outside, this comes in and sits down where the sleeping hobo used to be, and starts reading some photocopied class assignment. I draw the hell out of her, working around her slight movements and changes in position, deciding halfway in that I'd had enough line drawing, so hell, let's put some shadows in there. I'm pleased, and next week, I'll start with the bottom of this page.
Posted by P. Hos at 5:12 PM 1 comment: 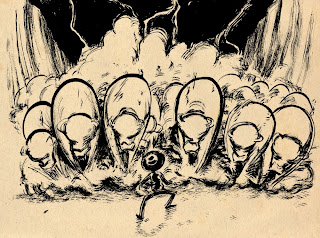 The second week of drawing people in the Mudhouse coffee shop on Sunday. One fellow gave me his card. I'll e-mail him after I turn the heat up here and I can feel my fingers again. I also saved myself a dollar by getting a black coffee and filling it halfway with milk instead of ordering a cafe au liat and letting the barrista do it for me. Sunday morning is the only day of the week I drink coffee. It's the cheapest thing there. 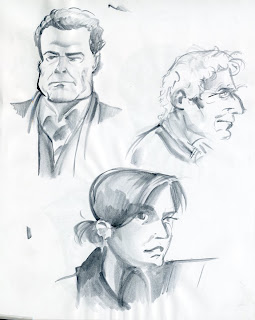 The two older men were sitting together discussing politics(?) There were four at the table, but obviously, two had their backs to me. A woman came up to me and said, "I recognize who that is, but I don't see her." So I pointed. I wonder if people notice me drawing. She was more active than I would have liked, (as an artist) but made up for it by just looking hot. 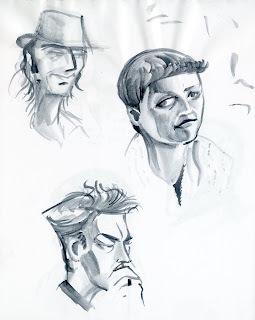 The hatted man on the top had really grungy hair. He was standing up, so I had to draw fast, but I wasn't fast enough. The girl was not as French as she looks here. She had pitch black hair, and I think I need another, fatter brush to really (insert proper word here*) it. The last fellow needed to be drawn, despite his wandering hand, due only to the facts that he looked exactly like Bon Jovi, and whose hair was exactly as pictured here. 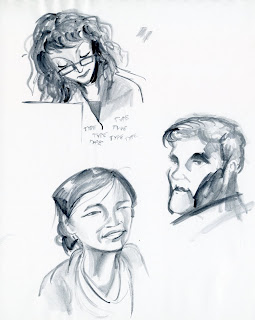 I tried to exaggerate the teased out, "Liz" hair on the bespectacled girl, and ended up failing miserably. Maybe it was just the coffee, but she was the daintiest person I have ever seen. The other two folks were talking to each other. The man is a prime example of how you really shouldn't try to draw someone whose head is almost completely obscured by someone else's head, whose head was completely obscured by itself. She doesn't appear here because her head does not apparently occupy Euclidean space.

*the word is "Captured"

If I can make it, I'm going to start a new "thing": Sundays, go down to the Mudhouse cafe and sketch until I get hungry. Here's the results of today. 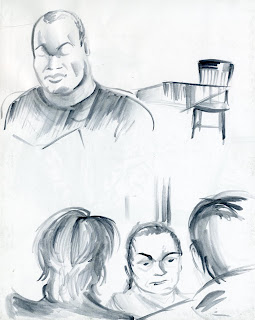 Having forgotten my pencil, I started straight sketching with my water pen and payne's gray. The guy on top was reading a book. When he left, I drew his chair. The guy on the bottom looked like Andy Serkis, but he left before I could finish. 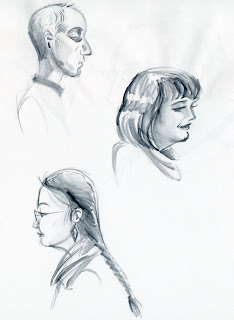 The skinny guy looked like he was writing a book. Or studying, or something. The other two girls were playing chess on the other side of the room. For some reason, the one with the ponytail ended up looking Chinese, but she isn't. 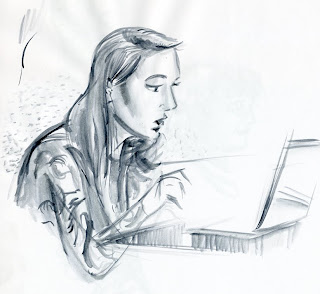 This girl was very good and barely moved the entire time I was in the cafe. Except her hand. 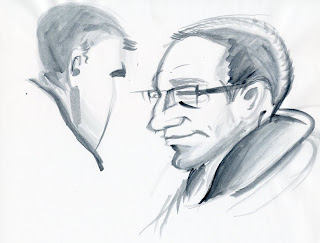 I dropped too much water in my color tray and made up for it with broader strokes to soak it up.
Posted by P. Hos at 1:28 PM No comments: