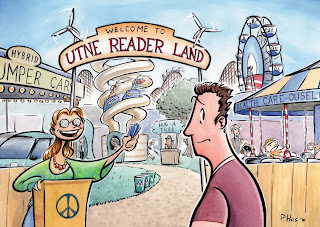 Hey, look! This little half-page ditty appears in the current issue of The Utne Reader, which features, besides me, Nelson Mandela, on the cover. There appear in the magazine two other illustrations by me for the same article, a witty jaunt by a conservative writer into the morally upright and logistically difficult world of being a liberal. I won't show them because, this being a nationally published magazine, there is no reason you can't pick up a copy for yourself and write the editors on how you thought my illustrations were the selling point, which, if you are reading this, they would be.

This video accurately portrays my current feelings on the subject of being published by Utne.
Posted by P. Hos at 12:28 PM No comments: 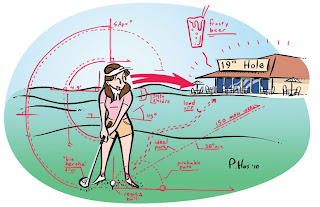 The new Bethesda magazine is out, which means the new "Domestic Disturbances" is in, which means my illustration once more graces the final page.
Posted by P. Hos at 12:25 PM No comments: 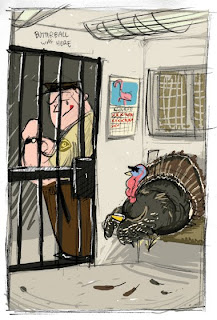 Having eschewed with my previous sketch due to technical difficulties, I present this one, which I should have finished and sent out before Thanksgiving. I hope. Perhaps in the final, it will be clear that the turkey is playing a harmonica and his November swimsuit calendar features a flamingo.
Posted by P. Hos at 9:42 PM No comments: 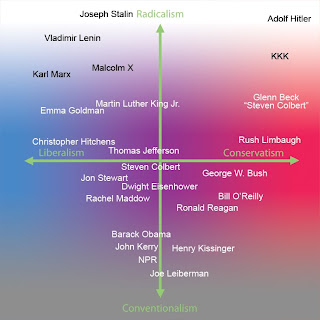 Welcome to the Political Spectrum, a work in progress. I made it when it occurred to me that there were more dimensions to political ideology than mere conservatism and liberalism. In an effort to map this out, I decided adding the spectrum of radicalism versus conventionalism, which measures how much a person's ideas would change the status quo.

You'll notice that as one becomes more radical, the harder it is to identify them as either liberal or conservative. For example, Joseph Stalin's dictatorial rule can hardly be called liberal, however, he rose in power under a leftist Communist political system. Stalin's placement on the liberal side of the board shows tells us more about the rhetoric of this administration than about his policies. I also had to view everyone through the lens of history, which is why Ronald Reagan now looks like a conventionalist. This was harder to do than it looks.

As I put names in, I also noticed a V-shaped pattern appear. Perhaps because it's hard to be a radical moderate, just as it's hard to hold strong political views if you think everything is fine. Most of the American population, I believe, lies in a soft triangle between John Stewart, George Bush, and Barack Obama.

Let's spread the world. The more nuanced our understanding of the Political Spectrum, the smarter this country becomes.
Posted by P. Hos at 1:51 PM No comments: 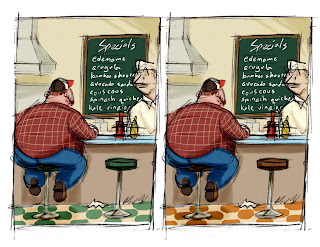 Well, okay. I'm now working on my fall promotional postcard. I've gotten some sketches done too. Shame I got started so late, or I could do something more seasonal. I wanted to draw Halloween monsters.
Posted by P. Hos at 8:09 AM No comments: