The Fruit Pie: It Is Drawn 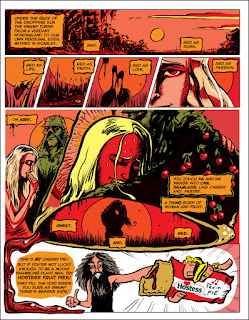 In honor of the sad news of Hostess Brands going out of business, the theme (which was suggested by a lot of people) is to pick a comic book character that you’d like to see our artists do an old school Hostess ad for. You can also name which Hostess product you’d like to see the character sell, but that’s optional.


This week's entry is clearly influenced by Alan Moore's seminal run on Saga of the Swamp Thing, especially issue #34, in which Abby and Swamp Thing commune and consummate their love on a higher plane with the aid of a hallucinogenic tuber grown off of Swamp Thing's back.  Personally, I feel it's the best issue of the run, and it was a heck of a lot more fun to draw than, say, a mushy green man fighting Etrigan the Demon for a stash of Twinkies.  I did my best to give the pages that iconic Steve Bisette/John Totleben feel, even if all I had were some Microns and a brush pen.

And because I steadfastly refuse to take any of this very seriously, we end on Moore himself, apparently incredibly high, hocking Hostess fruit pies with lewd jokes, as he would in real life.

Email ThisBlogThis!Share to TwitterShare to FacebookShare to Pinterest
Labels: alan moore, comics, hostess, swamp thing, the line it is drawn