Okay. Here's the process. This first sketch, which I did in my shiny new sketchbook while eating a pizza pretzel at 10 at night in a Barnes and Noble. 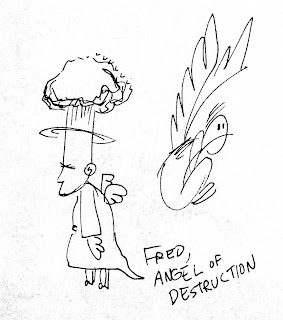 I thought it was an interesting idea, so I pursued it along the avenue of, what would make an angel's head explode? Maybe their heads explode when they're mad? 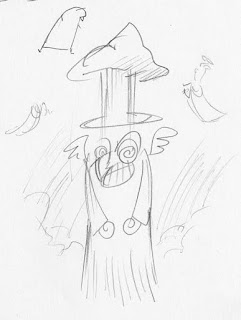 Okay, not that interesting. So what? I decided Fred was not a good name for an angel, and started researching angels and saints, and other celestial beings whose might conceivably explode. It turns out that Christians aren't that keen on names Saints and angels after things like destruction and anger and nuclear holocaust. I'd have to make my own. 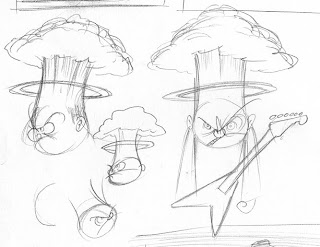 Right? So now I have a bottom-up angel of...Wrath? Heavy Metal? Elmer Fudd? Saint Angus, Patron of Rawk? Clearly, this whole things about the angel being mad is not working. Wouldn't it be compelling if this explosive angel of destruction (I never really left the idea) was still calm and angelic while he spread mass chaos and radioactive devastation? Let's try that. The key is to create a scene that leaves the angel as the focal point, while creating a viable and interesting setting to place it in.

It's hard, so I went the minimalist approach. 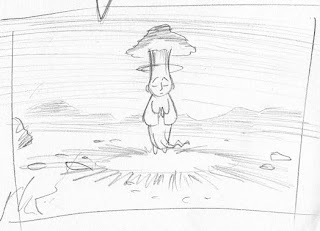 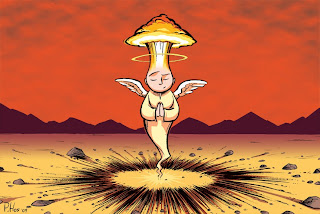 I'm still not entirely happy with it. One person commented that putting the angel off-center would make for a more interesting composition, and I agree. But I still like the simplicity of this. Any other element would potentially take away from the impact.

So I'm not going to change anything until I know for sure it will improve the piece.