The Line: Dan Didio has Crossed It 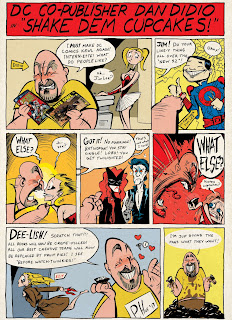 This is my little Hostess comic mocking Dan Didio, Co-publisher (and therefore guy in charge of half the creative decisions) at DC comics.  Now, there have been a lot of complaints about the way DC is being run, and to be fair, I completely agree with the large majority of them.

Bad editorial decisions have left DC with a comics continuity that makes no sense, alienated creative teams, present and past, pissed off the public, and generally screwed around with bad ideas that they think will make themselves look "cooler."

So Dan Didio is a bad editor, who is losing his company fans left and right, and whose decisions are leading to bad stories and lame characters.  So I made fun of him in a fake Cupcakes ad for The Line: It Is Drawn, over at Comic Book Resources.

This is brilliant sir...funniest thing I have seen in a long time.