Mohammed: It Is Drawn 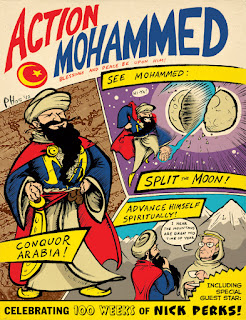 This is Action Mohammed, the Super-Prophet of the Muslim faith.  Given that images of him are frowned upon to prevent Muslims from worshiping the man instead of the teachings (way to go on that), the irreverence of a comic book cover ought to dissuade any such inclined people from throwing away their torah and bowing in the direction of my art instead.

In honor of Fred Van Lente Day, we’ll tie in with Fred Van Lente’s upcoming project, Action Presidents, by having out artists do “Action” versions of other historical figures (not Presidents or Philosophers, of course). You suggest a historical figure and our artists will come up with an “Action” design for them (like how Plato was a wrestler, so the great Ryan Dunlavey designed him as a big masked wrestler)

Email ThisBlogThis!Share to TwitterShare to FacebookShare to Pinterest
Labels: action, comics, mohammed, the line it is drawn